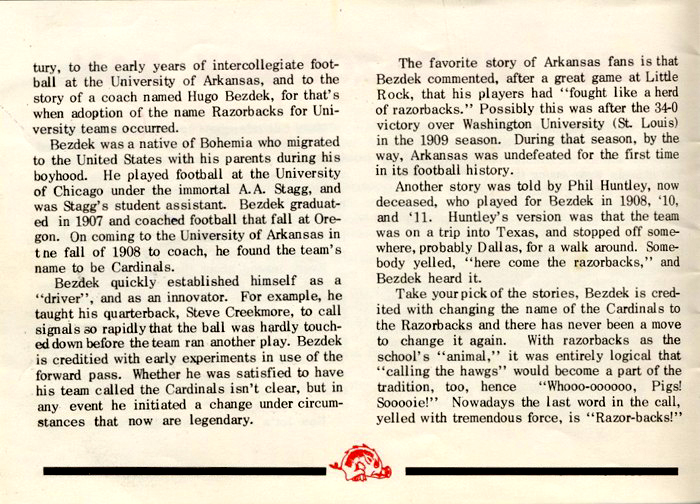 tury, to the early years of intercollegiate football at the University of Arkansas, and to the story of a coach named Hugo Bezdek, for that's when adoption of the name Razorbacks for University teams occurred.

Bezdek was a native of Bohemia who migrated to the United States with his parents during his boyhood. He played football at the University of Chicago under the immortal A. A. Stagg, and was Stagg's student assistant. Bezdek graduated in 1907 and coached football that fall at Oregon. On coming to the University of Arkansas in the fall of 1908 to coach, he found the team's name to be Cardinals.

Bezdek quickly established himself as a "driver", and as an innovator. For example, he taught his quarterback, Steve Creekmore, to call signals so rapidly that the ball was hardly touched down before the team ran another play. Bezdek is creditied with early experiments in use of the forward pass. Whether he was satisfied to have his team called the Cardinals isn't clear, but in any event he initiated a change under circumstances that now are legendary.

The favorite story of Arkansas fans is that Bezdek commented, after a great game at Little Rock, that his players had "fought like a herd of razorbacks." Possibly this was after the 3-0 victory over Washington University (St.Louis)
in the 1909 season. During that season, by the way, Arkansas was undefeated for the first time in its football history.

Another story was told by Phil Huntley, now deceased, who played for Bezdek in 1908, '10, and '11. Huntley's version was that the team was on a trip into Texas, and stopped off somewhere, probably Dallas, for a walk around. Somebody yelled, "here come the razorbacks," and Bezdek heard it.

Take your pick of the stories, Bezdek is credited with changing the name of the Cardinals to the Razorbacks and there has never been a move to change it again. With razorbacks as the school's "animal," it was entirely logical that "calling the hawgs" would become a part of the tradition, too, hence "Whooo-oooooo, Pigs! Sooooie!" Nowadays the last word in the call, yelled with tremendous force, is "Razor-backs!"