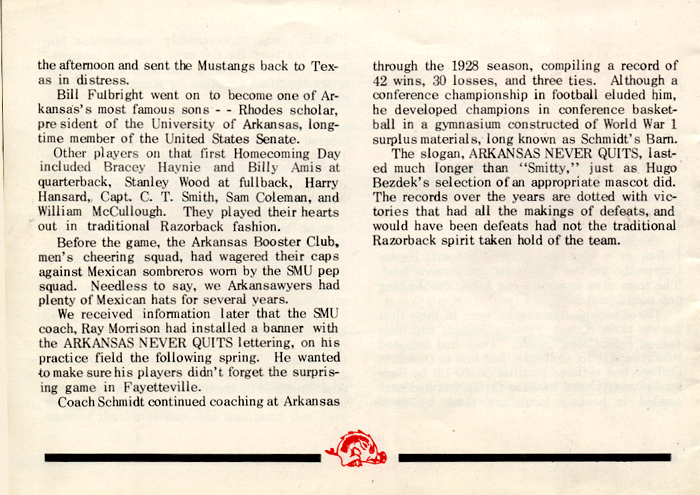 the afternoon and sent the Mustangs back to Texas in distress.

Bill Fulbright went on to become one of Arkansas's most famous sons - - Rhodes scholar, president of the University of Arkansas, longtime member of the United States Senate.

Before the game, the Arkansas Booster Club, men's cheering squad, had wagered their caps against Mexican sombreros worn by the SMU pep squad. Needless to say, we Arkansawyers had plenty of Mexican hats for several years.

We received information later that the SMU coach, Ray Morrison had installed a banner with the ARKANSAS NEVER QUITS lettering, on his practice field the following spring. He wanted to make sure his players didn't forget the surprising game in Fayetteville.

Coach Schmidt continued coaching at Arkansas through the 1928 season, compiling a record of 42 wins, 30 losses, and three ties. AIthough a conference championship in football eluded him, he developed champions in conference basketball in a gymnasium constructed of World War 1 surplus materials, long known as Schmidt's Barn.

The slogan, ARKANSAS NEVER QUITS, lasted much longer than "Smitty," just as Hugo Bezdek's selection of an appropriate mascot did. The records over the years are dotted with victories that had all the makings of defeats, and would have been defeats had not the traditional Razorback spirit taken hold of the team.