Candessa Tehee highlighted available resources and concrete strategies for beginners to integrate a new language into their everyday lives. Tehee is a full-blood Cherokee who grew up in a close-knit, traditional community in which Cherokee language and culture were mainstays. She earned a doctorate in linguistic anthropology from the University of Oklahoma with a dissertation focused on the experiences of second language learners in endangered language communities.

The artists from the "Stories, Visions and Memory: Contemporary Southeastern Indian Art" exhibit discussed their work and their inspiration. 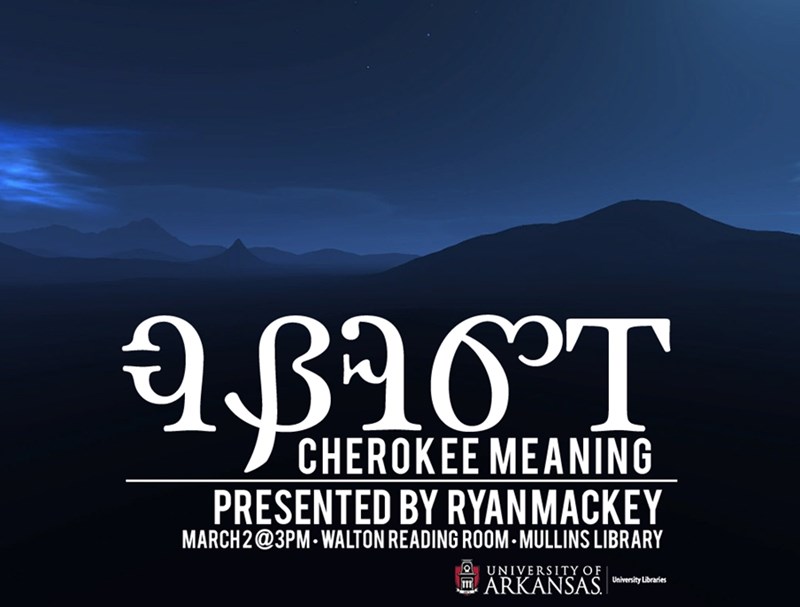 Cherokee language expert Ryan Mackey spoke about the confluence of language, cultural identity and worldview. The presentation covered Cherokee language revitalization efforts and the impact of multilingualism in the face of monolingual movements. Mackey is a Cherokee citizen and graduate of the University of Oklahoma's Native American Studies Program. He is a spiritual leader in his local community and is a participant in Cherokee traditional cultural practices. He has worked in various roles within the Cherokee Nation and is currently the language curriculum supervisor and facilitator for the Cherokee Language Master/Apprentice Program, which trains conversationally proficient Cherokee language teachers to be adept in using language immersion methods. He is also a member of the Cherokee Elder Plant Society (Medicine Keepers) for the Cherokee Nation's secretary of natural resources. 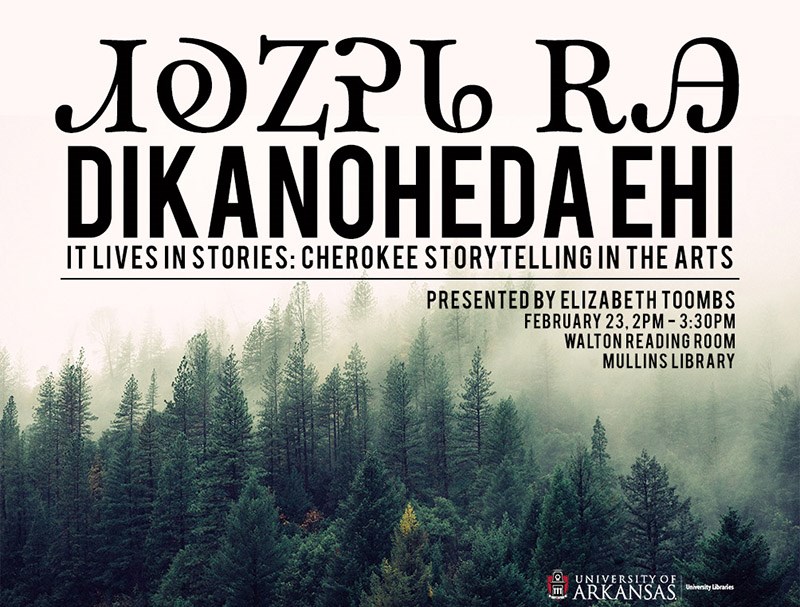 It Lives in Stories: Cherokee Storytelling in the Arts

Elizabeth Toombs examined the intersection of Cherokee storytelling and visual arts as thefirst of three speakers in the University Libraries' "Explore Native American Storytelling through Arts, Literature, and Culture" program, featuring programs on Native American language and culture at Mullins Library in February, March and April. Toombs is an enrolled Cherokee Nation citizen who procures art. Toombs' previous roles include positions in the nonprofit and corporate legal sectors. Committed to serving her community, Toombs is a Cherokee language advocate and volunteers with cultural outreach. She earned her Master of Arts in Literary and Cultural Studies degree from the University of Oklahoma and a Bachelor of Arts degree from Oklahoma City University. Toombs is also a graduate of the Oklahoma Arts Council's Leadership Arts Program, which is dedicated to supporting the state's art and cultural industry.

Award winning independent cartoonist Keith Knight was the guest speaker for the 2015 Black History Month event at the University of Arkansas at Fayetteville Libraries. In a dynamic, interactive, and forthright manner, Mr. Knight presented his socio-political slideshow: They Shoot Black People Don't They: A Cartoonist's Look at Police Brutality. Knight's illuminating presentation was a call to reflect on the recent police shootings and the effect of police brutality "in the African-American community from the 1991 beating of Rodney King by Los Angeles police officers to the fatal shooting of Michael Brown by a Ferguson, Missouri, police officer this past summer, and even more recently, the shooting of 12-year-old Tamir Rice by a police officer in a Cleveland, Ohio, park."

Lissette Szwydky of the English Department lecrured on Mary Wollstonecraft's A Vindication of the Rights of Women, one of the materials in the Wisdom of the Ages Athenaeum exhibit of rare materials from the Remnant Trust

Professor Liang Cai of the History Department lectured on Shengii Ti's The Illustrated Life of Confucius.

Robert D. Madison, Professor Emeritus of English at the U.S. Naval Academy, composed his cycle of fifty contemporary sonnets while living near Frederick Douglass's birthplace on the Eastern Shore of Maryland and during production of Madison's prize-winning play Prospect for Freedom: Frederick Douglass and John Brown (Baltimore Artscape 96).

In celebration of Black History Month, the University of Arkansas Libraries hosted Janis Kearney, publisher, author and advocate. Kearney discussed Daisy: Between a Rock and a Hard Place, a biography of civil rights leader Daisy Bates, written by Kearney and published by Writing our World Press, the micropublishing company she founded in 2004. Following her presentation, professor emeritus Roy Reed and professor Gerald Jordan, of the Walter J. Lemke department of journalism at the University of Arkansas, joined Kearney to discuss the civil rights movement in Arkansas and the nation.

Professor Jeannie Whayne of the History Department lectured on slavery and emancipation in the United States, referencing the works Notes of the State of Virginia by Thomas Jefferson, My Bondage and My Freedom by Frederick Douglass, and the Emancipation Proclamation by Abraham Lincoln, all materials in the Wisdom of the Ages Athenaeum exhibit of rare materials from the Remnant Trust.

Professor Ben Fagan of the English Department lectrued on Frederick Douglass's My Bondage and My Freedom, one of the materials in the Wisdom of the Ages Athenaeum exhibit of rare materials from the Remnant Trust

In August the Libraries participated in iConnect, a program to familiarize underrepresented students with campus resources. The program also provides a series of academic workshops designed to address specific challenges students may encounter in their first year on campus. Library volunteers included Kate Dougherty, Tess Gibson, Jordan Nielsen, Martha Parker, and Sarah Spiegel. Approximately 150 students attended the event; most had not taken library tours at that point. The students appeared enthusiastic about the resources available to them. 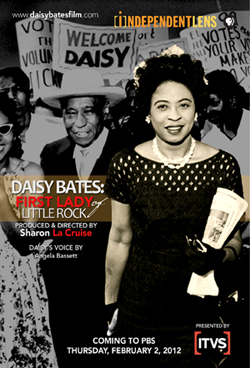 In celebration of Martin Luther King, Jr. week, the University Libraries and Diversity Affairs hosted a prescreening of the PBS documentary Daisy Bates: First Lady of Little RockThe film's producer and director, Sharon La Cruise, discussed the documentary filmmaking process as well as the social and historical issues the film brings to focus. 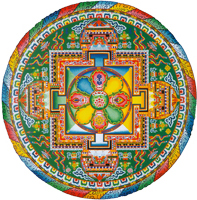 Tibetan traditions were the focus of events surrounding the visit of His Holiness the Dalai Lama during Tibet Week 2011. 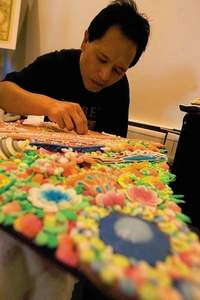 Sonam Dhargye conducted a live demonstration of the building of a traditional Tibetan Buddhist butter sculpture, which is central to spiritual development in Tibetan Buddhism and are considered a high form of Tibetan art. 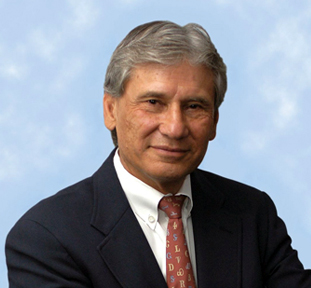 Reception to Honor Chad Smith, Chief of the Cherokee Nation

Cherokee Nation Principal Chief Chad Smith visited the University of Arkansas in honor of Native American Heritage Month. The citizens of the Cherokee Nation elected Chadwick "Corntassel" Smith as principal chief in 1999. Smith has brought unprecedented growth in the Cherokee Nation budgets, bringing in more money from both federal agencies and tribal enterprises. 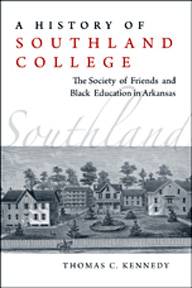 "We Surely Owe a Debt to these Long Downtrodden People"

The University of Arkansas Libraries' Special Collections Department joined with the UA Press to present "'We Surely Owe a Debt to these Long Downtrodden People': The Accidental Founding and Amazing Survival of Southland College, 1864-1925" by Professor Emeritus Thomas C. Kennedy. The lecture was based on Kennedy's research for A History of Southland College: The Society of Friends and Black Education in Arkansas published in 2009 by the UA Press. 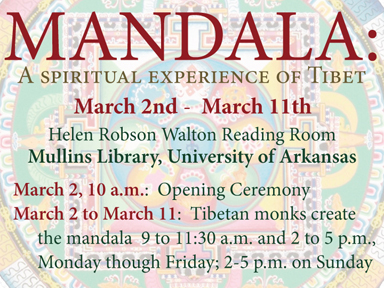 Mandala: A Spiritual Experience of Tibet

Geshe Dorjee, instructor at the University of Arkansas's Fulbright College of Arts and Sciences, and Gedun Pekar of Fayetteville's Tibetan Cultural Institute of Arkansas were joined by two visiting scholars of Tibetan culture, Zoepa Gyatso and Lama Agha, and the four created a Tibetan sand mandala in the Helen Robson Walton Reading Room of Mullins Library. The mandala was constructed as an educational tool for the students and community, and as an offering of peace and harmony. The event was open to the public, and visitors were invited to watch the creation of this sacred design. 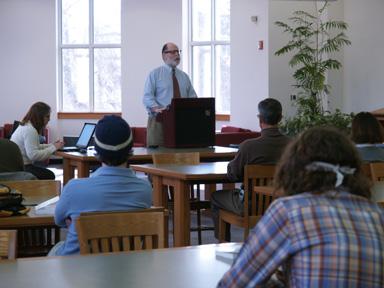 Suffering Doesn't End Once the Killing Has Stopped

Professor Samuel Totten gave a lecture titled "The Suffering Doesn't End Once the Killing has Stopped: The Plight and Fate of the Survivors of the 1994 Rwandan Genocide." Copies of Totten's book The Plight and Fate of Women During and Following Genocide were available for sale on site by the University of Arkansas Bookstore. 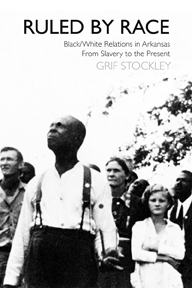 Jim Crow in the Natural State: A Look at White Supremacy in Arkansas History

Arkansas historian and author Grif Stockley gave a lecture in honor of Black History Month entitled "Jim Crow in the Natural State: A Look at White Supremacy in Arkansas History." Following the lecture, Stockley signed copies of his most recent book, Ruled by Race: Black/White Relations in Arkansas from Slavery to the Present, published by the University of Arkansas Press. The Press offered copies of the book for sale at the event, with proceeds going to the University of Arkansas Libraries' Special Collections Department.

Memphis artist George Hunt hosted two walk-through tours of his exhibit in Mullins Library. Hunt called them his "Walkin' Talkin' Gallery Tour," in which he described each painting and his motivation for painting it. Each lecture was followed by a reception and poster signing opportunity with Mr. Hunt. The event gave attendees the opportunity to listen to the creative process of this nationally-recognized artist and to ask him questions. 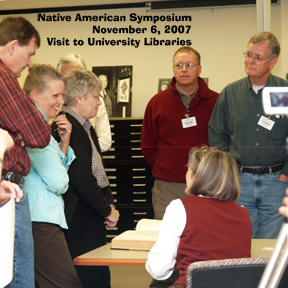 The 2007 Native American Symposium held its kickoff event at the University of Arkansas Libraries on November 6, 2007. Event co-chairs Gloria Young and Frank Scheide were on hand for the event, which began with a short welcome from Dean of Libraries Carolyn Allen. Participants in the symposium toured the Edward S. Curtis exhibit hanging in the main lobby area of Mullins Library before heading down to Special Collections to see the original Curtis portfolios housed in the rare books collection. 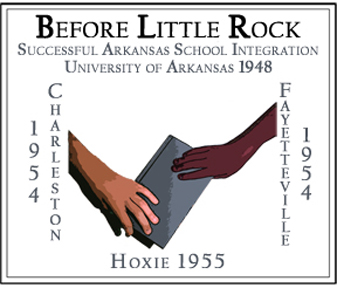 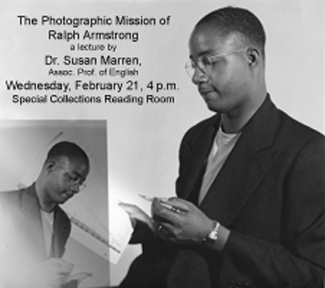 The Photographic Mission of Ralph Armstrong

Susan Marren, assoc. professor of English, lectured on the life and works of Ralph Armstrong, the Little Rock photographer whose exhibit was currently on display in Mullins Library. Seven members of the Armstrong family, including his son and daughter, were present for the event.